My Tweets
Posted on September 4, 2015 by Bristol Skeptics Society Blog

I won’t go into the film too much, it’s on Netflix if you want to watch it. My brief review is, at least they provide some balance by talking to real farmers about why they choose GMO, patented seed and use pesticides. And the film could be a lot shorter if he stopped filming his kids playing about. Actually it’s notable that the only real noise the audience made throughout the film were the awws and chuckles at what the kids said.

Then the Q&A with Better Food’s founding MD Phil Haughton, who said nothing, Lawrence Woodward from Beyond GM, who was the mouthy firebrand, and Lee Holdstock of the Soil Association who blanked me when I tried to give him a flyer. 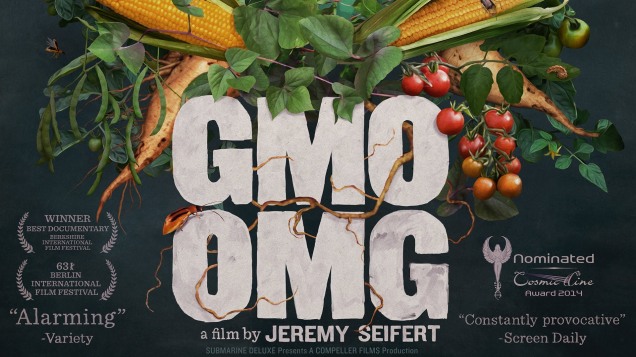 Alarming, but not for the reason the film suggests.

Jon got in first with a question about the ethics of the anti-gm movement in humanitarian work, with protest groups, such as Greenpeace, encouraging Haitian farmers to burn gifted, Monsanto branded seed that was portrayed in the film to be GM but was in fact a non GM hybrid maize[1]. Lawrence Woodward claimed that Greenpeace were not involved but Jon insisted they were. [2]

Jon then moved on to mention Golden Rice and Lee Holdstock provided an anecdote about a Monsanto rep at a conference who gave a talk about Golden Rice.  Asked about why people are not being growing leafy greens, which are a good source of Vitamin A, the rep couldn’t answer. Someone in the conference audience said that because corporations had arranged a monoculture of rice, that’s why they didn’t grow leafy greens. I think. I’m a bit hazy on what that conspiracy theory actually was. “So they’re providing a solution, to the problem they made in the first place!”  This is as direct a quote as I can remember, knew I should have recorded it…

Nope. The Big M aren’t involved in GR except for some unrestricted patent licensing, Syngenta are the main industry body working with GR.[3] Rice is a staple crop in places like the Philippines[4], farmers know how to grow it, it’s part of their religious beliefs[5]. In transferring the Beta Carotene gene to a rice plant, you work with the local culture, not tell them to change and just grow what we grow.

There was another question that I forget because I was to busy practicing mine in my head :)

Then the poor old chap who had owned a plant nursery until, sadly, his wife died of, if I recall correctly, cardiac arrhythmia. Then his dog died of pancreatic cancer (?) and he was researching stuff and he found Glyphosate caused these things, oh and crohn’s disease which his son (?) had. It’s always sad when people suffer loss, and you can understand how this gentleman would hook onto this seeming causation, especially with the misinformation available on the internet.

This turned into the gentleman complaining about how his ground will never be glyphosate free, with Woodward stating that you could never be glyphosate free cause it hides in clay and organic matter and a soil test can miss that, and Holdstock saying that so long as you do it there way from now on, you’re OK. Sadly the gentleman kept talking over them, even when they took his Mic away.

“Given that multiple scientific bodies, such as the World Health Organisation, the European Commission and the Royal Society have reviewed the evidence and declared the GE breeding techniques have no more risk than conventional breeding techniques, why single GE out for risk and harm? Wouldn’t plants bred by mutagenesis, where you zap the plant material with radiation to encourage mutation, be just as risky? To quote the film, where’s the outrage?”

I was proud of that for a second, then I felt a bit of a dick. Didn’t want to be a dick but Jon riled me up. That’s my excuse.

Woodward kicked in, explaining mutagenesis for the crowd. Then he turned agreeable, talking about the need for transparency in regulation and long term safety studies in mutagenesis. I qualified that this should also include standard hybridisation and he got a bit wobbly.

But there are long term studies of up to 2 years, and multigenerational studies, and they support a “no extra risk” position.[6]

Woodward moved back to bullet points that I found agreeable. Regulation, transparency, mutagenesis, wobbly moment on the hybridisation and then back to how GMOs have no long term safety studies and safe familiar ground.

I can’t really remember the rest of the questions, I was too pumped up with my ego. I’m being a dick again. 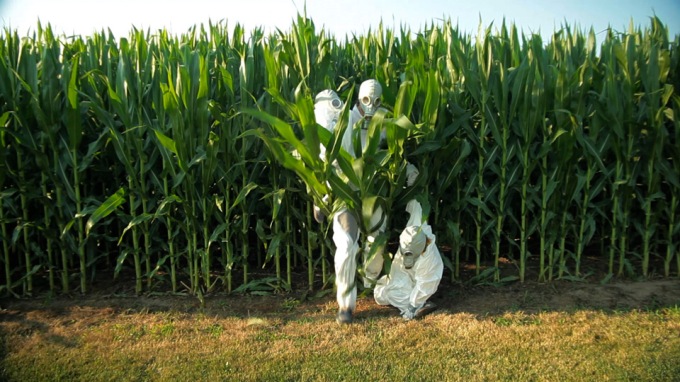 A particularly transparent scene, where Seifert dresses his kids in bio-hazard suits and runs through corn for no reason.

There was a question after mine, where someone asked if more studies should be funded. Woodward came back in starting with how studies can say anything and you never really prove anything with a study anyway, before listing several studies that supported his position as proof of harm.

There was a vote for who would want labelling, the majority had their hands up. Then a question from a youth (I’m getting old) about activism. Holdstock said we should all tweet the scottish environment secretary Richard Lochhead to give him praise for being so bloody brave. Woodward gave his firebrand speech, dropping in a “wake up” as all good activists should do. Holdstock said that people should buy more organic food, because they’re only 1.4% of the retail market.  Woodward came back with some more rabble rousing. I can’t remember if the words “Get angry” occurred.[7] I really need to start recording these things.

Anyway, a vote from the crowd for getting angry raised about 4 hands. I was tempted to put mine up… Dick.

There were other votes but my booze addled brain is getting fuzzy now, I think most people decided to shop organic. Maybe the others can fill in :)

Anyway, I ran outside to flyer, and Frances had beat me to it. I stuck a flyer out to everyone, smiled and said “more information about genetic engineering!” Ravi couldn’t get a look in, I was too fast for him. Frances guarded the sneaky other door until most of the audience had left, I suspect the glyphosate man may have pinned down Woodward.

After retreating to the pub for a post match pint, Frances asked me “Well, first activist event. What’s next?”

I think I might start a chapter of March against Myths actually.  You in?